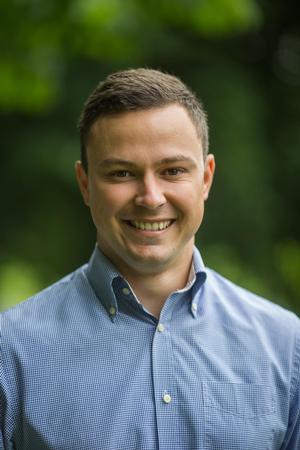 I grew up in the Blue Mountains, west of Sydney, Australia, and moved to the UK in 2010 after meeting my wife Lyndall, who was living in Morpeth at the time.  I graduated with a Master of Chiropractic degree from McTimoney College of Chiropractic in 2014. Since then I have practiced in numerous clinics, specialising in differing Chiropractic techniques, before moving back to Morpeth in 2016. We have three young boys who keep us very busy. In November 2018, I became owner and director of Morpeth Chiropractic, following the retirement of Dr Vincent Sharkey DC.

My relationship with chiropractic began at a young age, with a history of migraines as a child. After seeing a Chiropractor, the migraines stopped and this inspired my interest and sincere belief in the Chiropractic profession.

I have always loved sport and in particular, Baseball. As a pitcher, throwing up to 120-130 pitches in a game caused repetitive strain injuries within my body. In one particular Australian Rules Football match, a wayward tackle caused further injury to my lower back. Chiropractic helped me to recover from these injuries quickly, thus enhancing my sporting performance and enabling me to keep doing the things I love.

I believe in the importance of continued personal and professional development, including learning new adjustment techniques and systems. In 2015, I attended the Inspiral Paediatric seminar, which reinforced a firm belief in the benefits of chiropractic care for children. A game changer for me has been ABC (Advanced BioStructural Correction). In 2018 I attended my first seminar here in the UK with the founder, Dr Jesse Jutkowitz. Since then I have been privileged to attend further seminars in Melbourne, Australia in 2019 and Birmingham, 2020. The changes I have seen with ABC, and in many cases very short periods of time, have been amazing and not only for myself, but for those I treat.

My ultimate goal as Chiropractor is to enable people of all ages and walks of life to become
stronger, healthier and happier in themselves.

Your BODY, Your Health and Your FUTURE.

Your E-mail has been sent. We will be in contact with you soon.

Please refresh the page and re-submit the form.

SORRY
Your content caused an error and your email has not been sent.
Please remove any unusual characters and try again